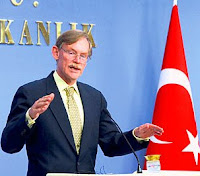 Robert B. Zoellick, the president of the World Bank, was in Turkey last week. During his four-day visit on July 19-22, Zoellick praised Turkey’s economic progress with caution. On top of his agenda was the need to increase female participation in the Turkish workforce. It wasn’t a coincidence that Zoellick commended Turkey’s remarkable economic performance and spoke of the growing gender-gap in Turkey concurrently. The Turkish case presents a dilemma: Despite Turkey’s successes in macroeconomic stability and poverty-reduction; the participation of women in economic life is abysmal. Turkey was among the lowest scoring countries in the 2010 World Economic Forum Gender Equality Gap Report and scored 126th out of 134th in the UNDP Gender Inequality Index. What is more worrisome is that women’s economic participation rates have been declining in the last decade. The latest figures stand at 25 percent, significantly lower than the OECD average.

Why is women’s labor force participation so low and declining? Two recent studies supported by the World Bank, “Turkey’s Greatest Untapped Potential: Women” (2009) and the Scientific and Technological Research Council of Turkey (TÜBİTAK)’s “Women Employment in Turkey” (2010), give us helpful clues.

According to these studies, urbanization is a key contributor. Women, many of whom are unpaid agricultural laborers in rural areas stay home when they move into urban areas, citing reasons such as family pressures, security reasons, harsh working conditions, and low-wages. This is particularly the case for those with little or no education. While young men, even in the rural areas, are transitioning from agricultural jobs into better-paid jobs in the manufacturing and services sectors, women are staying home. A top reason cited by women is the lack of affordable childcare. According to the TUBITAK study women in Istanbul have to pay “between 500 and 600 Turkish Lira per month (about $350-400) just for childcare if they decided to work and more for other extra costs of additional household help.”

Among other contributing reasons to staying home, women list “harassment” and “gossiping.” In the interviews, they said “men often make sexual gestures towards women employees and that women do not know how to protect themselves against sexual harassment.” Rumors are also considered a concern even for educated women. TUBITAK study quotes a female engineer who, despite being extremely qualified for a particular job, was not hired. Apparently, the employer said: “I am looking for someone who can have business trips with me. But how could I go with a female worker? It can lead to rumors.”

The new initiative, Women Gender Equality Certificate, that Zoellick announced jointly with Turkey’s prominent women’s organization, KAGIDER, is a highly encouraging step to overcome some of these challenges. The initiative attempts to bring new rules and regulations to fight against gender discrimination on promotion, training, and working conditions. There are other notable initiatives such as subsidizing employers’ social security contributions for newly hired women for up to five years. Yet, women’s stories indicate that focusing solely on employers and structural reforms is only half of the problem. Their voices point to deeper socio-cultural issues of a society that is still struggling to balance conservative values with realities of a global era and internalize men-women co-existence in the workforce.

Whatever one’s beliefs and values may be when it comes to equality in the workforce, Turkey cannot afford excluding the women. The reason is simple. As Diego Angel-Urdinola, the lead author of the World Bank study so succinctly explains: “In the same way that you wouldn’t play football without a full team, countries can’t compete globally if they don’t use the full potential of all their citizens.”

Asli Gurkan is a Social Development Specialist at the World Bank based in Washington-DC.