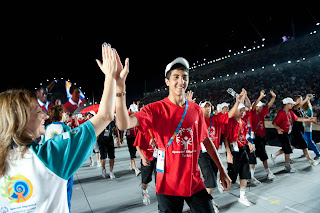 Don’t we all want to live in a society where equal opportunities are based on tolerance, social inclusion and acceptance regardless of ethnicity, gender, religion, and abilities? I know that I do. I want to live in a community where each person’s uniqueness is appreciated and nurtured. That’s why I paid attention to the 13th Special Olympics World Summer Games which took place between June 25-July 4 in Athens. World Games are one the most influential events that promote social inclusion and acceptance for people with intellectual disabilities.

This year’s games celebrated the lives of more than 7,000 special athletes from nearly 180 countries. Turkey was one of the 180 countries and participated with 105 athletes. Team Turkey competed in seven different disciplines. The enthusiasm of these brave athletes captured the hearts and minds of the many and sent a powerful message to the world, “everybody can win”. There are just over 14,000 athletes in Special Olympics in Turkey receiving training on Alpine Skiing, Aquatics, Basketball, Football, Gymnastics, Powerlifting, Table Tennis and Volleyball.

“Special Olympics Turkey relies mostly on private philanthropic funding” explains Maureen Rabbitt, the Director of Communications at Special Olympics who is responsible for the Europe and Eurasia regions. Since its inception, Dilek Sabanci, an outspoken supporter and an inspiration to people with intellectual disabilities in Turkey, has been at the heart of the movement. 30 percent of Special Olympics Turkey’s funding comes from commercial sponsors.

Melih Gurel, the National Director of Special Olympics in Turkey, describes the most prevailing challenge in Turkey to be the lack of awareness and understanding from parents on the potential of training for their children. “Special Olympics Turkey finds it difficult to encourage athletes to leave their homes or schools to train due to resistance by their parents. This is an educational and public awareness matter that Special Olympics Turkey is working to address.”

Wilfried Lemke, the United Nations Special Advisor on Sport for Development and Peace, spoke at this year’s opening ceremonies and also made a point on 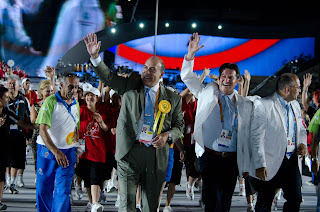 awareness. “Special Olympics transforms communities from closed to open ones, from intolerant to accepting ones and by using sport to accomplish this, has come to represent the good, the power and the true spirit of sport.” True, the challenge is due to the indifference and prejudiced attitude towards the intellectually disabled. Living standards of people with disabilities and quality of services offered are also important indicators of a country’s health, education and economic development.

In recent years, Turkey has made progress in acceptance and inclusion of people with intellectual disabilities thanks to a few organizations like Special Olympics Turkey, the Human Rights in Mental Health Initiative (RUSIHAK), and one of TPF’s grantees, Tohum Autism Foundation and many more. Efforts of such organizations reflect a growing movement towards the inclusion of the intellectually disabled into society. There are many ways in which you can help to promote the advancement of people with intellectual disabilities. You can volunteer as a coach or run events, and write and share stories of your experiences.

“The Key is Opportunity,” as Special Olympics so simply puts it. These and other organizations provide the keys for change to athletes and supporters alike. Will you take the opportunity to make a difference?

Pelin Cebi is a former Associate Director for Development for the New York City Region of Special Olympics. Ms. Cebi currently lives in San Francisco and works as a training program specialist in a leading financial institution.

PHOTOS
From Top:
Turkish Athletes during the opening ceremony;
Muhtar Kent, Chairman of The Coca-Cola Company, marched with Special Olympics Turkey in the Parade of Athletes
Credit: Will Schermerhorn