The Beri(1) Road To Development:The Problems Of Rural Women In Turkey

“Here, local women walk up to highlands to milk their animals everyday, from June to September. We start out at around 10 in the morning and we reach our animals at around 1 pm. Milking takes half an hour. Then we walk back, each of us with a load of 10 to 25 liters of milk on our backs. Back home, we get busy again with childcare, boiling the milk, preparing dinner etc. This lasts until 5 pm. After that, we again spend 2.5 hours walking to “beri”, which means the beri takes 5 hours each day… You talk about ‘rural development’. I don’t quite get what it means, but it would be good for us, women, if you could improve the road to “beri”. The road now is too stony, our feet get hurt and it is too tiresome. It will make our lives easier if this road were to be improved. I wish there was a tractor to take us to “beri” and bring back.” (Female, age 28, Duzcealan Village, married with 2 children)(2) 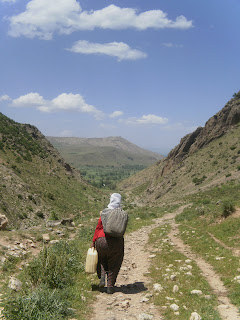 Duzcealan village is in Southeastern Turkey, considered one of the poorest parts of the country. There, 56% of the women are illiterate, only 27% of the village’s children continue to middle school and there has been massive emigration.
Since 2008, the Özyeğin Foundation has been implementing an integrated rural development program in Tatvan, Bitlis consisting of seven villages. Duzcealan is one of those villages. Called the Kavar Basin Rural Development Project, the project aims to restart the region’s economy by increasing agricultural and livestock production. It’s doing so by working specifically with women and children. That is an important factor.

The problems in this region reflect the problems Turkish women face throughout Turkey. Unfortunately because these women are in remote areas their problems often go unaddressed. That’s a big issue. Women make up 48.5% of the people employed in the Turkish agricultural sector (Male employment in the agricultural sector is 19.8%). Only 1.5% of women who work in agriculture are recorded officially as laborers, while 98.5 % are unrecorded labor working without pay or any social security in family lands. That these women make tremendous economic contributions but are not compensated or recognized is of great concern.

In Turkey, despite great emphasis on women’s rights, the challenges rural women face have been ignored. There are few programs focused on defending the rights of rural women and highlighting the problems they face as agricultural workers. That the government equates rural development with agricultural development and ignores the social aspect of the problem has resulted in little or no advancement for rural women. This makes the Özyeğin Foundation’s Kavar Basin Rural Development Project ever more meaningful.

Since starting work many different activities have been implemented for the social and economic empowerment of the Kavar villagers.

Fast initial steps have been taken to improve farming. More than 10,000 fruit trees have been distributed. Barns have been modernized to increase the efficiency in animal husbandry. Most importantly, training has been held for farmers to get them acquainted with different methods of production, sustaining natural resources, and farmers’ cooperatives. These training have resulted in a joint cooperative with members from six villages to engage in milk production and sales. This was an especially worthy accomplishment as there were many conflicts amongst villages merely a year ago. 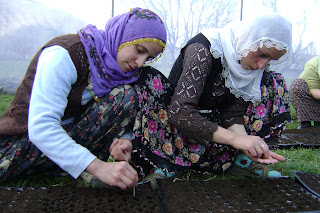 With 40% of Kavar farmers being women, special attention has gone into their empowerment. Kavar women have been provided training sessions on health, women rights, child-care, protection of environment, and animal health. Many have been enrolled in high school and literacy courses. An entrepreneurship project entitled “Women in the Kavar” has enabled them to produce flowers that are being marketed to neighboring towns.

The Özyeğin Foundation’s Kavar Basin Rural Development Project has also focused on ensuring female education. In every village, rural community centers and housing facilities for teachers have been built. The area’s young people have been supported with extra courses to get them ready for university exams. Those admitted have been awarded scholarships.

The Özyeğin model applied in the Kavar Basin is hoping to reverse migration to villages. Focusing on women has been an important first step.