Excerpted from Turk of America Magazine 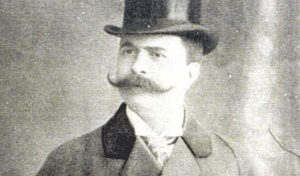 By Naim Güleryüz / Researcher-Writer
Mrs. Laurette Schinasi came to Turkey in 1930 to meet with Department of Health officials in order to present a petition to found a children’s hospital in Manisa in line with the last will and testament of her husband, Morris Schinasi; he had died three years previously in the USA. Construction began immediately, following approval by the Department, and the then International Moris Şinasi Hospital was commissioned in 1933; it still serves the public today, as the Moris Şinasi Children’s Hospital.
Morris was born in 1855 in Manisa to a relatively poor Sephardic family as one of four children; he had two brothers (Solomon, also known as Shlomo, and Yaakov) and a sister (Sultana.) Sephardic Jews, Spanish and Portuguese Jews, opted to leave their homeland in 1492 and thereafter rather than submit to forced conversion to Catholicism. The majority of the Sephardim settled in Ottoman lands following an invitation by Sultan Bayezid II. Of the 20,000 Jews still living in Turkey, some 96% are Sephardic.
Morris was forced to leave school and begin work when he was young. Falling ill at the age of 14, Morris was treated in hospital and soon appreciated the value of education. In 1870, at the age of 15 and with all he had to his name– two Mecidiye (Imperial gold coins)–he sailed to Egypt in search of new opportunities and began to work for a Greek tobacco merchant named Garofollo in Alexandria. Garofollo traded in tobacco as well as in the manufacture of cigarettes. He liked this intelligent, diligent, ambitious and driven young man and took him under his wing.

MORRIS’S DREAM
The year was 1890. Morris was 35 and his big dreams carried him far. Borrowing US$25,000 from his beloved boss Garofollo, he immigrated to the USA in 1892 and exhibited the cigarette-rolling machine he had designed himself at the Chicago Fair. Until then, every single cigarette had been hand-rolled, paper and tobacco being purchased separately; this new machine created a good deal of interest. He repaid the US$25,000 loan and sent out for his brother Solomon (Shlomo.) Once Shlomo had arrived in New York, they established the “Schinasi Brothers Company” on Broadway and 120th Street.
According to author Rıfat N. Bali, writer of ‘Moses’ Children, Republican Citizens’, their Egyptian Prettiest brand Turkish cigarettes, rolled with Turkish tobacco, soon became very popular. True to his origins and his own poor childhood, Morris invited Turkish workers, in particular from Manisa, to work in his factory. At one point there were some 200 Manisa Jews working there.

Morris lived as a bachelor until the age of 48; it was during a business visit to Salonica that he met the granddaughter of a colleague, Joseph Ben Rubi. He married the 16-year-old Laurette in 1903. They had three daughters (Victoria, Juliette and Altina).

ABDULHAMID II HONOURED
The New York Times reported on 7 March 1916, Schinasi Brothers sold their two million-dollar cigarette factories and all commercial rights to the business to the Tobacco Products Corporation in 1916 in exchange for three and a half million dollars and retired. Morris’s son Leon was elected to the board of the new company; he left this position in July 1918 and joined the Standard Commercial Tobacco Company as Vice-President and General Manager.
Abdülhamid II honoured Morris with a Mecidiye of the Fourth Order in 1906 for his services to the Turkish economy by importing Turkish tobacco to the USA and his son Leon (who had a soft spot for horses) was presented with a pure Arab stallion from the Ottoman stud line. The presentation was carried out by HE Mehmet Ali Bey, the Ottoman Ambassador to Washington, in July 1908.

The Schinasi brothers of Manisa, who were members of the Anatolian Sephardim Union and Peace Society as well as the Shearith Israel Synagogue in New York, joined many other institutions in the city to help other Sephardim in need. One of the leading such institutions, The Federation of Oriental Jews, elected Morris Schinasi Honorary President on the 7th of June 1914 at a meeting attended by over one thousand Sephardim at the school at 91 Forsyth Street, New York.

Solomon (Shlomo) died on Saturday, the 4th of October, 1919, following a two-week coronary illness, at his Villa Julia on Riverside and 89th Avenue. This mansion, which had originally been purchased from Isaac L. Rice, currently houses the Yeshiva Ketana Jewish school and is owned by a a law professor at Columbia University.

Morris died in September 1929 at the age of 74; in his will, he had designated a large portion of his wealth, well over five million dollars, to charity. A one-million-dollar fund was entrusted to the Chemical Bank and Trust Co. of New York for the express purpose of founding a hospital in Manisa, the town of his birth.

Morris never forgot his home country of Turkey; many of the rooms in the marble French Renaissance mansion he commissioned in 1909 (the architect was the famous William B. Tuthill, who had previously designed Carnegie Hall) at Number 351 Riverside Drive, 107th Avenue, were done in a Turkish style. The bathroom was set out like a Turkish bath with washbasins typical of that layout. This building is currently listed as a historical building and in 1979 was sold to Hans Smit, a law professor at Columbia University.
The surname Schinasi is thought to be a version of the popular Jewish surname Ashkenazi; yet Morris’s daughter Altina was unable to confirm this point during our interview. Altina was born on the 4th of August 1907; during her career as a shopwindow decorator, the Harlequin spectacles she had designed in the 1930s had proved highly popular. Altina had published her memoirs in “The Road I Have Travelled” (Apodaca Hill Press, New Mexico, 1995) and died in her home in Santa Fe on Thursday the August 12, 1999.

This, in short, is the life story of little Morris, who was cured of his illness at a hospital and who, when he became a successful businessman far from his homeland, never forgot his origins, bestowing a valuable institution for the aid of the less fortunate. May his story inspire us all.

MORİS ŞİNASİ CHILDREN’S HOSPITAL
Laurette Schinasi and Huntington Turner, a manager at Chemical Bank, travelled to Turkey and met the then Secretary of Health Dr. Refik Saydam and high-ranking officials on the 27th of April 1930. Long negotiations resulted in an accord on land allotment, construction and operation as well as the use of the fund. $200,000 of the fund was set aside for construction and equipment while the remaining $800,000 was deposited in Ziraat Bank, with interest to be paid to the hospital annually. The equipment and consumables for the hospital were imported on the basis of a special duty waiver as per Bill Number 1907, dated the 28th of December 1931.

The hospital was set in the midst of a seven-acre garden and equipped with state-of-the-art equipment and instruments. The architect was W. Stuart Thompson and construction began on the 1st of June 1932. Open prison inmates worked on the site; construction finished in a short time and the hospital was inaugurated on the 15th of August 1933 at a ceremony attended by the Governor of Manisa, Lütfü Kırdar. The hospital began to accept patients officially on the 1st of October 1933. Serving as a general hospital until 1968, it joined the Department of Health in that year and was recommissioned as a Children’s Hospital.

When it was first opened, the hospital grew its own vegetables in its garden and obtained eggs from its own chickens; the Head’s official vehicle was a horse-drawn carriage and the ambulance was a horse-cart. The horse was until recently listed as capital equipment and only dropped off the list when it died.
In time, the hospital’s own water source was handed over to the military and the small woods in the garden made way for concrete buildings; yet it still maintains its original 1930s look as well as the majority of its original infrastructure, such as the heating and air conditioning systems. This nostalgic aspect is reinforced by such details as the historic elevator that still works on a mechanical pulley system.

Thanks to the financial assistance provided by the original fund and additional State help, the buildings, now used as Health Directorate and School of Medicine, have been restored, rebuilt as needed and equipped with the latest technology. The boiler room was the most recent restoration and now serves as a modern laboratory. Upper floor rooms that were unused have been renovated and now serve as a private patients’ wing. The Celal Bayar University School of Medicine was opened on the 1st of March 1994 and the Moris Şinasi Hospital was taken over by a 23rd of April 1994 protocol from the Department of Health. The annex, the construction of which was finished in 1995, was added to the compound.

The Moris Şinasi Children’s Hospital, led by a selfless health team, serves the children in the area; it is one of seven children’s hospitals in the country. In-patients numbered 2,879 in 1999 and 2,032 between January and August 2000. Out-patients numbered 34,313. Occupancy rates were 54.6% in 1999 and 59.5% in the first eight months of 2000. Some 239 surgical procedures were carried out in eight months, eight of which were major operations. During the same time period, some 4,609 X-rays were taken.

The fund has been successfully managed by Chase Bank, as it’s now called; officials pay a visit to the hospital every other year and hand over the annual income. In addition, a Moris Şinasi State Children’s Hospital Development Society has been founded to support the hospital.