Making of the Documentary “Voices Unveiled: Turkish Women Who Dare” 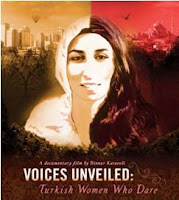 Growing up in a progressive family in Istanbul, I was provided with a great education and encouraged to pursue a career by my family.  However, I still felt society’s pressures in how I should behave and act as a woman.  “What would the neighbors think?” is a common worry for a lot of Turkish women no matter how liberated their families might be.  For the privileged, this subtle oppression might be irritating but a larger segment of women’s lives are dictated by the notion of the woman’s purity of reputation and honor.  In many less developed parts of Turkey, “honor” means a woman’s obedience.  “Honor killings,” the practice of murdering women at the hands of their family for transgressions such as extra-marital sex, are still practiced in the impoverished provinces.
As I set out to make the documentary, “Voices Unveiled,” my goal was to discover Turkish women who defied restrictions in the pursuit of their own dreams and thereby convey their stories.  During the filming, I met women from all walks of life but decided to concentrate on the stories of an artist, an activist and a dancer representing a cross section. Belkis (60s), Nur (50s) and Banu (20s), reflected different aspects of my personality. I felt a strong connection to Belkis’ art because her art is rooted in the traditional form of kilim, (Turkish Tapestry) and yet she creates abstract, minimalist and forceful designs that break out of the box and transcend the form. I immediately responded to Nur’s compassionate and diligent efforts on behalf of the less privileged women.  Many taboos concerning “professional dance” still exists in Turkey.  Banu, a champion ballroom dancer, had to fight against her family that did not accept her desire to dance publicly.  She had to continually walk the line between rebelling and reassuring, pressing on while demonstrating that her dancing is a legitimate pursuit.

As I explored the main problems Turkish women face, I realized that these concerns are not unique to Turkey. Gender inequality, and lack of education, economic freedom, and sexual and bodily rights afflict many women in the Middle East, Africa, Asia and Latin America. In the film, Nur, the activist says, “Democracy is impossible without women being empowered.” My goal with “Voices Unveiled” is to communicate to the audience the link between democracy and gender rights in the world.

Binnur Karaevli was born and raised in Istanbul and earned her BFA in Drama from Carnegie-Mellon University and her MFA in Film Production from University of Southern California.  Her films received top prizes from numerous film festivals around the world. She is currently working on a narrative feature film about the Ottoman Harem.  She splits her time between Istanbul and Los Angeles. For more information on the documentary, please visit www.voicesunveiled.com. Binnur Karaevli can be reached by emailing binnur@voicesunveiled.com

TPF along with the American Turkish Society will be holding a screening of “Voices Unveiled: Turkish Women Who Dare” on Wednesday, October 6th. RSVP online.

Please also join Binnur Karaevli and @tphilanthropy for a tweetchat on women’s sexual and bodily rights on October 5th at 2PM EST/9PM IST by using the hashtag #genderequality.