View from the UN on the Future for Women 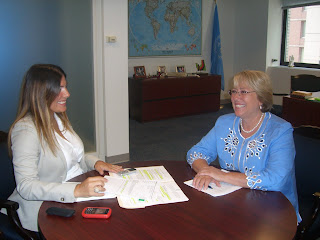 (Editor’s Note: This post has been cross-posted at onphilanthropy.com )

Recently, Michelle Bachelet, former president of Chile and the new head of the United Nations supra-entity on women, spoke with Turkish Philanthropy Funds about several topics, including women, philanthropy, and power. Today, as the UN celebrates its 66th birthday and a humanitarian response is mounted to help survivors of an earthquake in Turkey. Thi is Part 1 of this timely discussion.

UN Women is “a baby of UN reform” says Ms. Michelle Bachelet, who until last year was best known for being the first female president of Chile, and the first female defense minister in all of the Americas. Ms. Bachelet, who has broken every mold for the betterment of her country, is now ready to do the same, this time for the world’s women. The UN entity she leads supersedes the merger of four UN entities mandated with women empowerment and gender equality. She is now the under-secretary General of UN Women and is tasked to raise over $500 million in three years with a mission to make the UN a more powerful advocate for women. Recently, she sat down with Turkish Philanthropy Funds in the new offices of UN Women in New York. Investing in girls and women in Turkey is a top priority for Turkish Philanthropy Funds, a New York based community foundation serving the Turkish American diaspora. In response to the 7.2 magnitude earthquake yesterday in the eastern province of Van, TPF has established an emergency fund to direct philanthropic support to relief efforts on the ground. Since its inception in 2007, TPF has raised over $13.6 million. Education and women empowerment grants constitute the majority of TPF’s giving.

A new partner to the philanthropic community
Since assuming her role at the helm of UN Women in January 2011, Bachelet has so far raised about $230 million of the $500 million in contributions and pledges. Raising money is not easy in this financial climate, she acknowledges. “Traditionally our major donors had been governments.” Spain and Norway are at the top of the list, which also includes countries like Canada, the United States, Japan, and the Netherlands. But like many other non-profits, UN Women is also turning increasingly towards the private sector and to the wealthy individual philanthropists. She confirms UN Women has been following the Forbes magazine billionaire list closely. “In the world, there are more than one thousand billionaires; a huge proportion of the wealth of the world… and many of them have been contributors to the UN already…Bill and Melinda Gates, Ted Turner, George Soros.”

She adds Ms. Güler Sabanci to the list, Turkey’s most powerful businesswoman who took over as board chairman of the Sabanci conglomerate in May 2004 after the death of her uncle, Sakip Sabanci. Bachelet visited Turkey in May 2011 to co-host a UN conference to unlock the economic potential of rural women to accelerate development. While there she met with Güler Sabancı and had her sign the Women’s Empowerment Principles, which offers guidance to businesses on how to empower women in the workplace, marketplace and community. UN Women has “not only all the possibilities, but all the will to reach many of the philanthropists” says Bachelet, yet she argues it is not all about the money. UN Women seeks joint ventures with other organizations and individuals: “how we do things together [for a] winning possibility” is more important. UN Women partners with local initiatives as much as possible. Turkish Philanthropy Funds and UN Women, for instance, share a common local grantee partner as both provide funds to Mother Child Education Foundation (Anne Çocuk Eğitim Vakfı) in Turkey.

Why give through UN Women instead of donating directly to the local NGOs or philanthropic initiatives, I ask. She is not against direct giving; on the contrary, she supports it as long as the giving is targeted and contributes to national capacities. Still, UN Women has a comparative advantage: an unmatched global reach. “[UN Women] has representation in 75 countries with capacity.” That alone has a significant added value. “I truly believe in many parts of the world, you don’t need to reinvent the wheel. There is a lot of experience that can be shared…UN has the potential to take successful local approaches… [come up with a] a pilot plan that can be transferred to another place according to their own circumstances… and escalate progress [based] on internationally agreed upon goals.”

Such internationally agreed upon goals are viewed by many observers as lofty and unrealistic. Can the world achieve gender equality by 2015 as targeted by the UN Millennium Development Goals? Not likely, but that’s not the only concern for UN Women.

“In many countries, the data on the status of women is inadequate and research is needed in specific areas” she continues. “There are so many places doing so much research but [do we] know if it [benefits the women?]” Bachelet clearly sees the role of UN Women as a knowledge hub and a global network of people where all the information and expertise through research can be brought together. It is not an easy task, she acknowledges, given the number of actors involved. Diaspora philanthropy organizations are new additions among these players. Likewise, they emphasize intellectual giving through social and human capital transfers. In this crowded field, coordination and sharing of information by international organizations becomes all the more important.