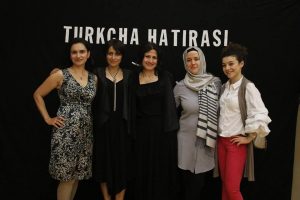 When her husband and Dilek Anderson got married, they knew would eventually need to make a decision as to where they will create their family home. He was a Microsoft employee and Seattle resident, and she was an attorney and Izmir resident. Dilek decided to remain in their home in Izmir with her daughter, and continue working as an attorney.

Dilek and her husband maintained their relationship long distance, but it became clear that being separated, and especially raising their daughter, was too difficult for both of them. “It was hard. What’s more important: family or career? And I felt it was family,” she said while explaining her decision  to move to America in 2009.“Our goal was to only be in America for a while, then return. But it’s been eleven years, and we are still here.”

Moving to a new country, leaving behind your career, family, friends, and culture, is overwhelming.  Especially if you do not have a network, friends/family, or a community that can ease the transition.

After living in Seattle for four years, Dilek was adapting. Her and her friend Mine would often have the same conversation about the struggle of being an immigrant woman in a new country. The two would talk about how the difficulties immigrant women faced were the same. The culture. The language. “What we realized was, all the ethnicities were separated, Turks with Turks, Indians with Indians. But we thought if we were just all together in this, then we could broaden our horizons and resources,” says Dilek when she was talking about how Turkcha was established.

Collaborating with attorney Kubilay Celebi, who worked with them pro bono on legal guidance, in 2013, Dilek and Mine created Turkcha. They wanted to create a comforting environment for immigrant women who left their careers, friends, family, and familiar surroundings to move to a new country. Their goal was to help these women adjust and feel part of a community, regardless of where they came from originally. Dilek explains, “We wanted to send the message of ‘We are in this together.- what we feel, go through, etc.’”

Recognizing the major hurdle for women to overcome is the language barrier, Turkcha organizes some free events in English including educational workshops, and what they call ‘happy activities– because women can give happiness to their kids, their families and their surroundings,’ says Dilek. “Over tea and coffee people meet each other, and share and listen to each other’s stories. These stories are how they connect to each other.” Turkcha also introduces Turkish culture to other immigrant women and holds celebratory cultural events for Turkish-American families.

One of the first things Turkcha realized was that women were in need of driving courses and a driver’s license. The women who take part in Turkcha’s programs often do not have the budget to pay for these courses which cost anywhere between $500-$1000. Women really need to drive in Seattle to help support their families, whether it was picking their children up from school activities or getting groceries or going to the doctor. So, providing support for driving courses became one of the first programs of Turkcha.

As Turkcha grew the organization has started to receive support from many partners they acquired. A partner, World Relief, helps immigrant families with their bills for up to six-months once they arrive in the US. When the six-month period ends or if other funding is required, World Relief refers them to Turkcha.

We were introduced to Turkcha by a TPF donor advised fund holder, Ayse Onalan.  When asked  why this organization and why now, she replied, “because I am an immigrant. I am a woman.” She added that this year, she is donating earlier due to the increased need brought on by COVID-19.

In these uncertain times, we have found comfort in our families, friends, neighbors, and through our communities. It is also a reminder that not everyone has similar  opportunities. Turkish Philanthropy Funds is creating the bridge to connect donors and partners, allowing us to expand our reach in helping our community.

As a response to COVID-19, Turkcha has provided financial assistance to immigrant women who have applied for their help during this time. They have an application process and work to respond quickly to the needs. They are also working to create virtual programs and events to host on their social platforms for their community. Dilek and the Turkcha board members Aysun Eskici, Esra Usta, Ayse Hilal Bayrak, Didem Demirkilinc, and Zeynep Akkus continue to think of innovative ideas to help the women that make Turkcha a community. From yoga to therapy, to share and discuss lives, they are supporting each other during these uncertain times. They have also worked to help women who have lost their jobs or had cut back on hours since the pandemic hit.

Additionally, with the hope of carrying on a common Ramadan tradition, they want to give back to those in need. They have launched a campaign where donors can help provide gift cards for families to use toward their grocery shopping in the month of Ramadan. They aim to support around 20 families. If you are interested in helping them achieve their goal, you may donate to their campaign.

“This year has been more difficult than earlier for a lot of refugee and immigrant families because of the coronavirus. Many people lost their jobs and they do not know when they will start to work again. Everything depends on how the virus will be taken under control. They are having difficulties both financially and emotionally.” They said in regards to their idea behind this campaign.