A Shepherd’s Journey to MIT

We are delighted to announce our newest partner: İlkyar Foundation. Established in 1998 in Ankara, İlkyar Foundation works wholeheartedly to provide children who live in the rural areas of Turkey through building libraries and showing them that even one book can change their lives.

The story of a shepherd from Anatolia inspired the establishment of İlkyar. This is a shepherd who became a great physicist and has impacted science immensely. In these days, when we have been discussing how pinnacles of human creativity change our perspective of our place in the universe, the story of Hüseyin Yılmaz is a great reminder that when given opportunity, young people can take on many challenges and make big contributions to our society.

The life of Hüseyin Yılmaz took a big turn when he met a professor at a hillside in Denizli. After a long conversation, the professor learned that Hüseyin was an orphan, that he needed to work to survive and tha 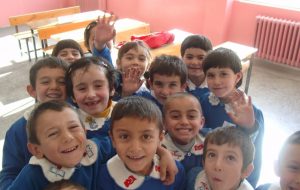 t he was illiterate at the age of 12. Believing that it was a shame that Hüseyin was not in school like his peers, the professor decided to challenge him. He gave Hüseyin a book that he was carrying with him knowing perfectly that Hüseyin would not be able to read it. He hoped that this would upset Hüseyin. Just like the professor predicted, the fact that he could not read the book disturbed Hüseyin very much. Motivated and determined by the professor’s challenge, Hüseyin learned how to read and write from open learning centers and graduated from high school. He didn’t stop there. He moved to Istanbul to study physics at Istanbul Technical University (ITU). During his time at ITU, he detected a mistake in a gravity theorem he was studying. His concerns about the theorem were beyond his teachers’ expertise. Unable to answer him, they reached out to one the best physics department in the world, Massachusetts Institute of Technology. As a coincidence, an MIT professor was studying the same problem. MIT invited Hüseyin to continue his studies at the Physics Department at MIT right away. Without any knowledge of English, Hüseyin traveled to Boston. Despite the language barrier, he completed his graduate thesis in three months. His journey continued with a Ph.D. During his time at MIT, Hüseyin contributed to many important studies in the world of physics. One of them is the famous “Yılmaz Theory of Gravitation.” Hüseyin developed a simple gravitational equation to complete Einstein’s theorem of gravity. A small help in his life had huge impacts for the society.

This fascinating journey of a shepherd inspired many. İlkyar’s Founder, Professor Vural was one of them. There are still many children in Turkey who don’t have enough financial means to receive a quality education. Some of them are as bright as Hüseyin however, since they are unable to afford school, their future is blurry. To help as many as possible, İlkyar Foundation has been visiting small villages with an old bus to provide every child in Turkey with a book. Since 1998 with 2,000 volunteers, İlkyar visited more than 350 villages, built many libraries and distributed countless books. Through songs and books, İlkyar tells the story of a shepherd whose journey started in Denizli and ended in Boston, to show them that no dream is beyond their grasp.

We are truly inspired by Hüseyin’s story and excited to be partners with İlkyar Foundation. If you want to be a part of this heartwarming mission and shape a child’s future with a book, please visit İlkyar Foundation’s page.