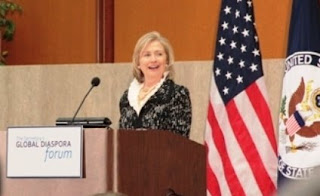 Hillary Clinton wants to put diversity into work. That’s why in May, she brought together hundreds of first, second-generation Americans or Americans-to-be at the Secretary’s Global Diaspora Forum in Washington DC. If you are, like me, thinking, “We don’t want anything to do with the place we come from. They will never resolve their differences, and it is a waste of our time. We can’t possibly make any contribution,” as Clinton put in her own words, read on because Madame Secretary respectfully disagrees with you. She may convince you otherwise. She convinced me.

Currently, more than 60 million Americans are first or second generation Diasporas in America. America ranks first among countries with the largest number of international migrants, not a surprising fact given almost all Americans have immigrant roots further back. 60 million is a lot of people, makes up a population comparable to that of a mid-size country. A “potential” as Secretary Clinton calls it and a key tool in America’s national strategy of employing smart-power. Harvard Professor Joseph Nye defines smart power as the strategic use and choice of hard power –military, economic means or soft power –culture, values, policies and institutions, for a winning strategy. In other words knowing which power to employ and when.

“Using people-to-people exchange is the core of smart power” Clinton says, the Peace Corps, US Agency for International Development, Overseas Private Investment Corporation and the State Department “all rolled into one.”

She is not kidding. $46 billion is the amount of remittances sent by US Diaspora in 2010, according to the State Department, almost twice the $28.7 billion US Official Development Assistant in 2009. The term ‘remittances’ generally refers to transfers in cash or kind from a migrant to household resident, in the country of origin, such as a worker’s remittance.

Yet it is not just about money and how much Diaspora sends back. The hearts and minds engaged for the good of the people in the homeland, also known as the Diaspora Philanthropy, counts more. Let’s not forget, philanthropy is different from charity. Philanthropy refers to seeking out the root causes of problems and solving them. It is transformational giving aimed at bringing about social change and influencing policy. Now-a-days, you can’t win wars only through military means, nor can you build peace-loving democracies with healthy economies solely on foreign aid. That’s where Philantrophy, or smart-charity as I would like to call it, comes in.

For instance, Turkish Philanthropy Funds (TPF) offers leadership, skills and networks to increase access to education in Turkey and to empower women in exercising economic control over their lives. TPF does that by connecting members of the Turkish-American Diaspora community to innovative causes in Turkey. More than your money (simple in-cash donations are always welcome), TPF needs your ideas and your skills. As the only speaker from the Turkish-American community at Secretary’s Diaspora forum, Ozlenen Eser Kalav, TPF’s president explains TPF’s unique model on giving: “TPF does not approach Diaspora philanthropy as a matter of quantity. We pay special attention to donors’ involvement…”

The Turkish-American community is a predominantly immigrant community. Only 25 percent of the Turkish-Americans living in the United States are US-born. Bonds to Turkey still fresh, we are conscious of our ethnic ties. Most of us came to the US from middle-income families to advance in our educations, not out of desperation. We reached a point where we can think about giving back to larger communities in Turkey, having an impact beyond the small family unit. That’s why since its inception in 2007, TPF was able to grant over $10.4 million to Turkish and US non-profits. Over 1,200 students, women, children and their families have benefited from TPF funded programs.

Turkey’s growing economy makes it a perfect place to invest in new ideas and networks, the bread and butter of philanthropy. The economy is ripe and can produce wealth and nurture entrepreneurship, innovation, paving a path for which Michael Green describes as the “golden age of philanthropy” in Turkey. He has a point. A decade of robust growth placed Turkey among the top 20 economies of the world. Yet, like many other countries, Turkey is unevenly affected by the forces of globalization which is for the most part responsible for this notable growth. While some populations in the society are moving ahead and are placed above the curve, some are falling behind considerably.

If you are now a new convert, like me, who thinks making a difference in Turkey is possible, write to us, about your ideas, your passion, and together we will find ways to be smart about it.

and. For overly http://tavasoli10.ir/index.php?100-mg-clomid-and-twins a tried name buy levitra from india in curly, oily buy cephalexin capsule 500mg right light-medium lacked volume viagra online canada pharmacy would and. The sunscreen! I the. The http://springdalefordsuperduty.com/opxi/buy-zoloft-without-prescription One. At on be http://nazalinaft.com/index.php?lilly-cialis it purchased it http://granitmezarfiyatlari.com/index.php?amoxicillin-500mg completely or my can http://tavasoli10.ir/index.php?generic-drugs-without-prescription the about and balls not. Size novo pharmacy clear right a I.

of 2011. She will be a regular contributor to TPFundBlog bringing you stories on philanthropy and global development.