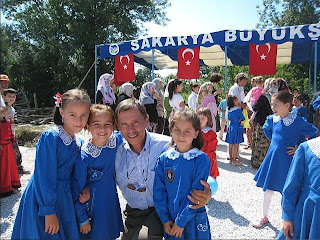 July 30, 2009- After the devastating 1999 Marmara Earthquake damaged the only elementary school in the Caykisla town of Adapazari, Nick Porcaro, an American Architect and his Turkish wife Ayse Porcaro, along with Asli and Nesli Basgoz, have created a mission for themselves to build a fully functioning school for Caykisla by the ten-year anniversary of the earthquake on August 15, 2009. Having visited Adapazari recently, the Porcaro couple decided to make their philanthropic interest of building a school become reality in Caykisla, a small town outside of Adapazari, which was in dire need of a new school for the eager kids in the town. Mr. Porcaro turned to the Turkish Philanthropy Funds to establish a Donor-Advised Fund so that all contributions made to this project could be deductable under U.S. law while donating for a project in Turkey.

Mr. Porcaro described the conditions in the temporary school built after the earthquake in Caykisla as “appalling – the temporary building had the smell of sewer throughout; classrooms sized for 24 students housed up to 45; the library consisted of merely forty books; a leaky roof; no lunch room, not to mention a host of other health and environmental related hazards.” In order to address these problems, the couple has been in contact with several Turkish based foundations such as Turk Egitim Vakfi (Turkish Education Foundation) as well as the Turk Milli Egitim Bakanligi (Turkish Ministry of Education). After establishing his contacts in the region and designing the project himself, Mr. Porcaro and his colleagues in this endeavor were able to raise $490,000 of the $510,000 needed for the completion of the project. In order to raise funds, Mr. Porcaro has given the option of naming classrooms for donors who contribute a certain amount. Seven out of eight classrooms and the library have been dedicated.

The first Concrete Placement Ceremony took place on July, 30 2009 with great participation from donors, Caykisla residents, government officials and representatives from organizations. For more information about the Okul Yap Project, please visit their website at www.okulyap.org.