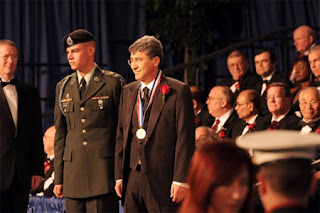 May 11, 2008- Turkish Philanthropy Funds founding Chairman Haldun Tashman was among this year’s recipients of the Ellis Island Medal of Honor presented by the National Ethnic Coalition (NECO) at its annual ceremony in Ellis Island’s Great Hall on May 10th.

The Ellis Island Medal of Honor is awarded to outstanding Americans who have distinguished themselves as citizens of the United States and enabled their ancestry groups to maintain their identities while becoming integral parts of American life. Along with Haldun Tashman, this year’s recipients will include NYT-best-selling author and health expert Dr. Mehmet Oz; former US Senator Ben Nighthorse Campbell; Gen. Duncan J. McNabb – US Air Force Vice Chief of Staff; Pittsburg Steelers Owner Dan Rooney; and Actor and Founder “Operation Iraqi Children” Gary Sinise.

Both the US Senate and the House of Representatives have officially passed resolutions recognizing the Ellis Island Medal of Honor, which ranks among the country’s most prestigious awards. Each year, Ellis Island Medal of Honor recipients are listed in the Congressional Record, honoring those who have made enduring contributions to the United States and to the world.

“This year’s recipients are known for both their professional successes and their acts of philanthropy – which have helped those in need here in America and abroad. They join a prestigious list of Americans who have been honored for fostering goodwill and making their communities and the world a better place,” explained NECO Executive Director Rosemarie Taglione. “Awardees exemplify the American Dream. I congratulate them and thank them for their continued efforts that touch the lives of so many. You make America proud,” Nasser J. Kazeminy, NECO Co-Chairman added.

Mr. Tashman is an entrepreneur from Phoenix, Arizona who came to the United States, after graduating from Robert College of Istanbul in 1966, to study at Columbia Business School with a Fulbright Fellowship. Ten years later embarking in entrepreneurship Mr. Tashman and his partner Steve Uhlmann grew their privately-held company to an annual sales volume of $200 million with 12 manufacturing locations on 3 continents. Since he was able to pursue a solid education through the generosity of others, he made helping people a motto for his life. Mr. Tashman served on the Board of Directors of Phoenix Country Day School from 1993-98, Assembly of Turkish American Associations in Washington, D.C., Turkish-American Business Forum, and Arizona Association of Industries. He is currently a Trustee of Arizona Community Foundation.

Haldun Tashman provides a graduate level Fellowship for MBA students at Columbia University and at Arizona State University (ASU), and has given grants to attract companies from Singapore and Turkey to ASU’s Skysong Innovation Center. Also since 2006, he spearheaded two social start-up initiatives: Establishing the first community foundation of Turkey in his hometown, Bolu, and founding a New York-based diaspora organization, Turkish Philanthropy Funds (TPF, www.tpfund.org), to promote philanthropy among Turkish-Americans.

Currently, Haldun Tashman is the founding Chairman of TPF, which aims to connect donors in the United States with high impact social projects in Turkey or in the United States. “We are very honored that our visionary colleague has received the Ellis Island Medal of Honor this year. This award is a great reflection of what TPF stands for: making outstanding contributions both to our homeland, as well as to our communities in America,” noted Ozlenen Kalav, who is the President and Chief Executive Officer of TPF. Mrs. Kalav further indicated that “donors do not give to TPF, rather give through TPF. Individuals may contribute to specific issue areas or organizations through our pooled funds. Or by opening a named fund at TPF, Turkish-Americans can channel their philanthropic dollars to their favorite NGOs in Turkey or to their local causes in the United States.” 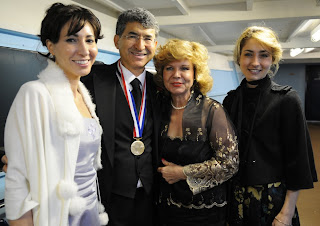