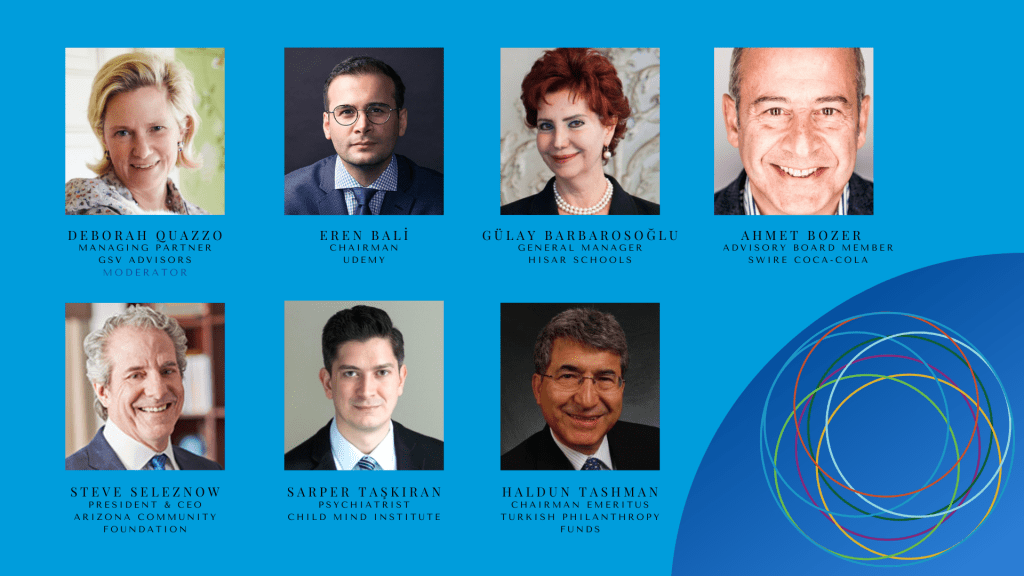 How technology and innovation can drive the future of education in Turkey and in the world. Our esteemed panelists, moderated by Deborah Quazzo, Managing Partner of GSV Advisors, will share their views on the importance of technology and the role of philanthropy in guaranteeing high-quality education, especially amid the COVID-19 pandemic.

Deborah Quazzo, Managing Partner, GSV AcceleraTE – Moderator: Deborah is the Managing Partner of GSV Ventures, a venture fund investing in education and workforce skills technologies that are disrupting the $7 Trillion sector. In addition, she is Co-founder of the ASU+GSV Summit. Now in its 12th year, the ASU+GSV Summit celebrates innovations and innovators across the global “preK to Gray” learning and talent landscape and attracts over 5,500 attendees.

Eren Bali, Founder, Udemy: CEO and Co-founder of Carbon Health Eren Bali is a serial entrepreneur with a vision to democratize healthcare. Eren leads the team at Carbon Health to reimagine the healthcare experience from the ground up and make world-class care accessible to everyone. Previously, Eren paved the way to make education accessible as co-founder of Udemy, the world’s largest marketplace for online courses with over 50 million students worldwide, where he continues to serve as Chairman.

Gulay Barbarosğlu, Ph.D. General Manager, Hisar SchoolsAdvisory Council Member, American Community Schools AthensMember of Board of Trustees, Ozyegin University: Professor Gülay Barbarosoğlu was the Rector of Boğaziçi University between August 6th, 2012 and November 12th, 2016. During her career, Professor Barbarosoğlu served as the Vice-Rector for Research, as the founding Chair of Center for Disaster Management, as the Chair of Department of Industrial Engineering, as the Founding Chair of Financial Engineering at Boğaziçi University, and as the Head of the Kandilli Observatory and Earthquake Research Institute. She has been the General Director of Hisar School since April 2018.

Ahmet Bozer, Advisory Board Member, Swire Coca-Cola, Board Member, Esas Holding Board Member, The Whole Coffee Company: Ahmet Bozer served as an Executive Vice President of The Coca-Cola Company until his retirement in March 2016, serving as the President of Coca-Cola International since January 1, 2013. In that position, he was responsible for all units outside North America. Ahmet began his career in 1983 as an Assistant Professor at the DeVry Institute of Technology. He joined the audit firm Coopers & Lybrand in Atlanta in 1985, serving in a variety of audit, consultancy & management roles.

Haldun Tashman, Chairman Emeritus, Turkish Philanthropy Funds: Born in Bolu, Turkey Haldun Tashman is an entrepreneur who came to the United States, after graduating from Robert College of Istanbul in 1966, to study at Columbia Business School with a Fullbright Fellowship. Upon graduation, he worked at Deloitte in New York City for two years. Tashman moved to Phoenix, Arizona and became co-owner/manager of a privately held plastics contract manufacturing company called The Tech Group, Inc.